I’ve seen many web designers who work at 1x and I’ve read articles that say it’s best to design at 1x. But I think a more modern workflow is to work at 2x (Retina) size. In this article I’ll explore the various issues affecting our workflow, so you can understand why I recommend designing at 2x.

Let me clarify something before getting started. I’ll only talking about designing web graphics in Photoshop. Other apps like Sketch, Adobe XD, or Illustrator work totally differently, so this article will only focus on Photoshop.

If your unsure of what I mean by 1x and 2x, please read my post: Retina Web Graphics Explained.

Now onto the topics! I’ll look at one issue at a time, declaring a winner for each issue.

If your Mac or PC doesn’t have a 2x (Retina) display yet, it will eventually. Just like no one uses black and white monitors anymore, eventually all displays will become 2x. Eventually we may not even create low-res 1x graphics anymore, so why keep designing at a size that is eventually going to be irrelevant?

Once I got used to designing 2x graphics on a 2x Retina display, it’s hard to go back to viewing pixelated 1x designs. I think all designers should get a 2x display as soon as possible. There’s simply no other way to see how some people are viewing your designs.

The Adobe Preview CC mobile app lets you preview your phone and tablet designs on an iPhone or iPad live as you work. If you’re not already using it, you’re missing out! It’s a great app, and it assumes you’re working in 2x files:

Adobe seems to have built this app assuming you’re designing in 2x files, so that’s further support for my recommendation to design at 2x.

Assuming we all have (or will get) a 2x display, being able to quickly zoom to 100% with a keystroke looks like the winner to me.

When working at 2x you must double type sizes, stroke weights, etc. 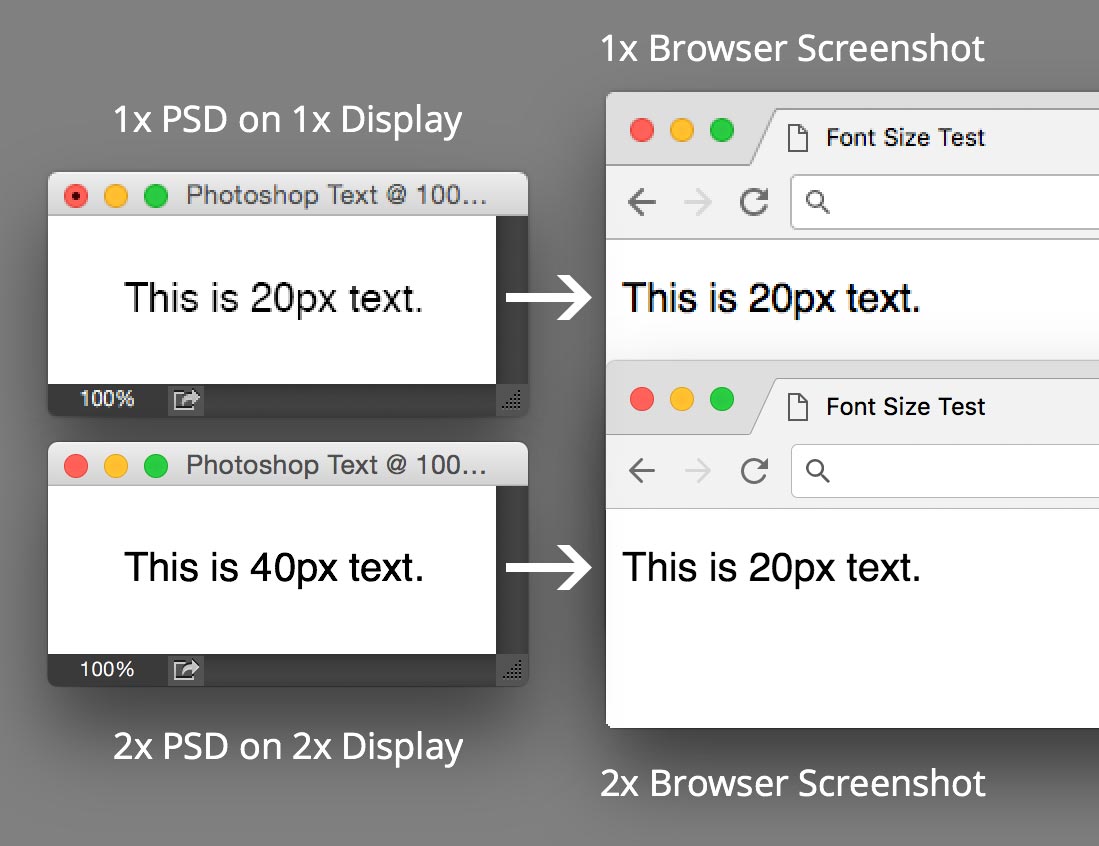 Here are some examples:

Giving specs to developers requires an extra step when working in 2x files. Because all sizes are doubled, you have to divide them in half to get the amount for coding into CSS. You could reduce the image size to 50% and Photoshop will do all the math for you, but this is the biggest thing to dislike about working in 2x files. It’s manageable, but everyone (designers and developers) must understand what’s going on.

Designing at 2x wins by a score of 4 to 2. Both workflows have their pros and cons, but I hope I’ve shown you that the benefits of designing at 2x outweigh the few downsides.